Development to combine flexibility and speediness to make real the "having to accumulate the hope to visit again".

The hotel industry has been forced to make major changes due to the pandemic of COVID-19.

Tokyu Resorts & Stays Co., Ltd., one of the largest companies in the hotel industry, has also been severely affected by a significant sales decline from overseas.

Differences from rivals that were created by Package Development.

Following the pandemic of infections, the corporate performance of the hotel industry was beginning to show a significant difference.
In the face of increasing difficulty in gaining Customers, the gap between hotels with those succeeding to retain their own Customers and those who have failed in this process were getting significantly wide.

Tokyu Resorts & Stays Co., Ltd. had designed its own Web application with a package, and the company was facing the apparent inability to acquire detailed Customer data as desired, as well as the inability to properly implement measures of Customer retention suitable for the times.

Developing a mobile app, which is important for increasing Customer retention rates and loyalty, was another challenge too. The technical limitations of using the package to build a reservation site were a hurdle that prevented this from being accomplished.

Jitera is faster and more flexible than the low-code tools that large companies have.

“The most deciding factor was the lack of worries after development compared to other companies' low-code tools."
As for the reason for the selection, Mr. Keitaro Takahashi of the Sales Promotion Group, Sales Department, Tokyu Resorts & Stays Co., Ltd. who was in charge of this project, said.

“There were only a few dozen engineers in Japan who could handle the low-code tools that the other company's Proposal Details suggested, and we were concerned about how to respond after development. On the other hand, in the case of Jitera's tool, the code that the engineer is writing could be output as it is, and the output is the same as that of full-scratch development. Therefore, the restriction of engineers by the tool is unlikely to occur. Additional development after release is also possible in an agile manner without privileges, which means that we were able to place the order with very little post-development anxiety”

Development was completed in 8 months, although other companies were told it would take 1~1.5 years. The pure development process took only 4 months:

We develop systems using the development automation platform "Jitera". To put it simply, "Jitera" is a system that allows a computer to write the code that an engineer is writing, instead of a human being. 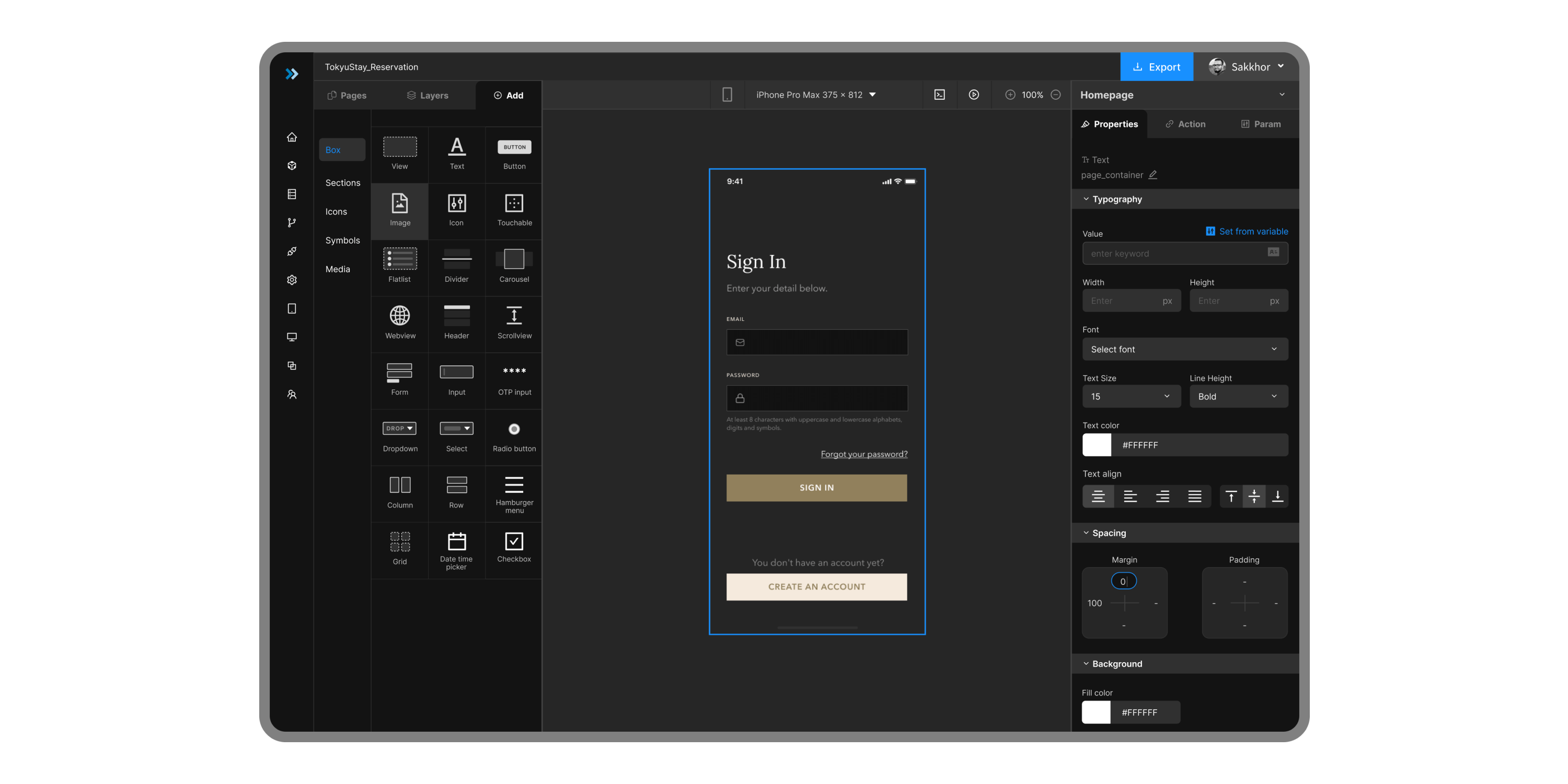 With more flexibility than other low-code tools. It allows rapid development of software with no platform Privilege or vendor lock-in. "Jitera" was also fully utilized in this project.

Of the eight-month project time period, only four months were spent on pure development, a speed that would not have been possible without Jitera's fast development system, which also allowed us to spend sufficient time organizing requirements and defining them.

We had heard that the development time period for other companies' hotel reservation systems was one to one and a half years. We didn't expect to be able to develop it so quickly."

Mr. Takahashi expressed his satisfaction with the speed of this development, saying, "Unbelievable speed compared to cases proposed by other companies." 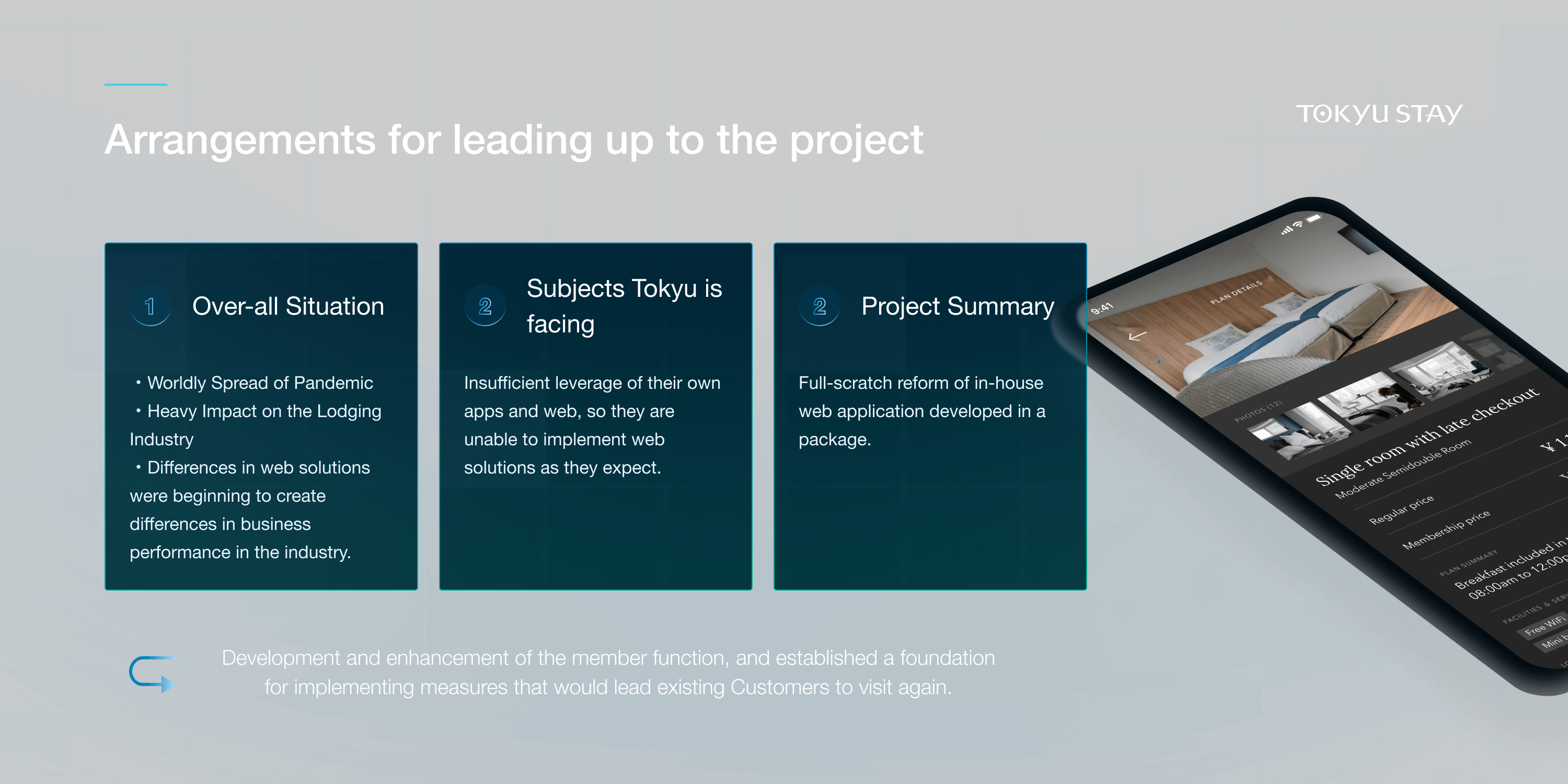 Achieved both speed and quality. Successful release with no major problems.

In the case of full-scratch development for a large company, unexpected problems are bound to occur. This is because the requirements are more complex and the number of stakeholders involved is increased.

Based on past experience, Takahashi and the other members of this project team had anticipated that major problems and schedule delays would occur.

This time, however, we have been able to release the product on schedule without any major problems. Furthermore, since the release of the new web and iOS/Android applications, the number of reservations and other business figures have been growing positively, and the company has gained a good reputation within the company also.

Speed alone is not the only thing Jitera values, achieving the mission of the business is also important to us. 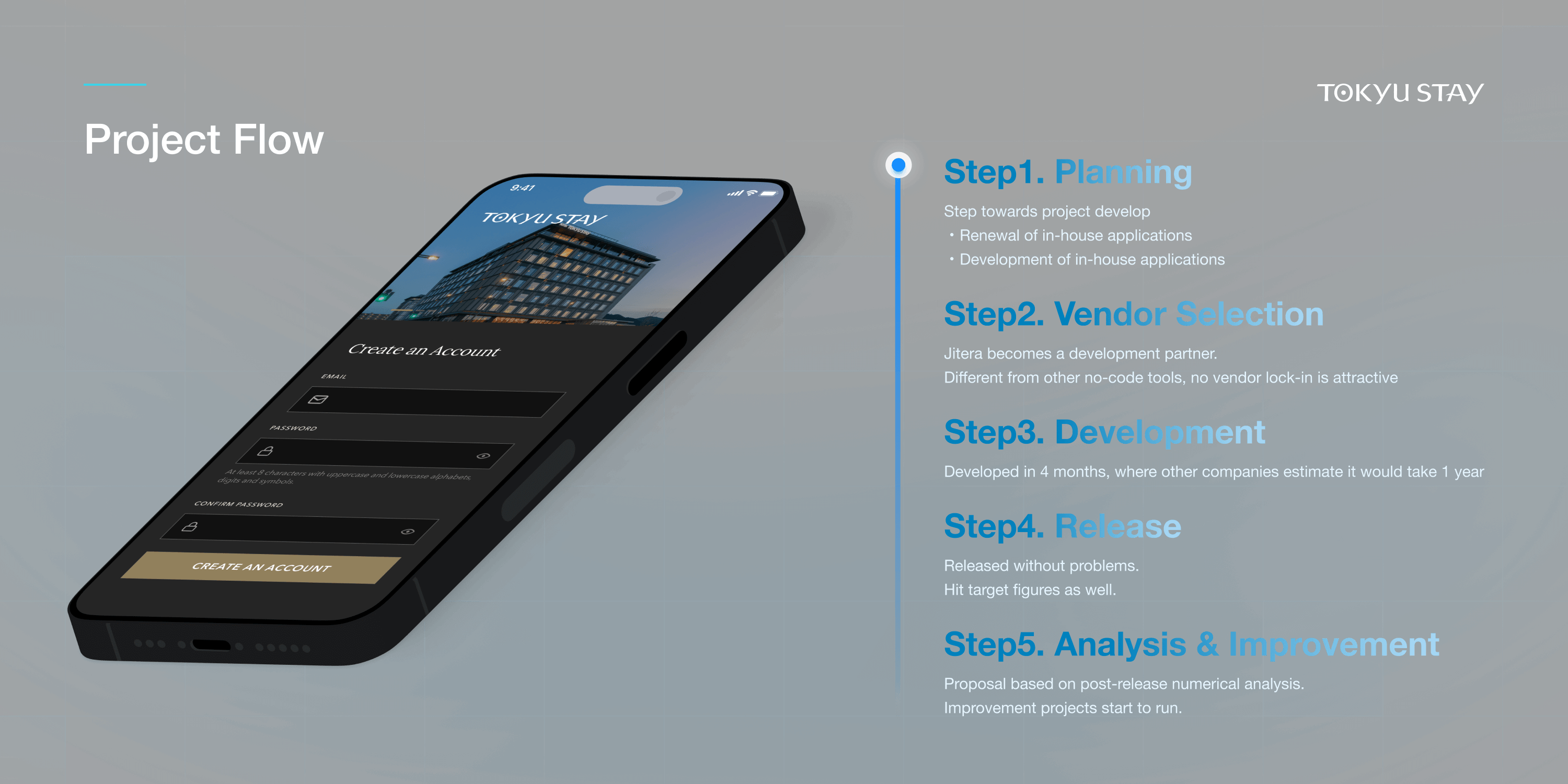 Significant improvement in CVR. It worked for the targeted business figures too.

Successfully reformed its reservation system, both web and application, from struggling to differentiate itself from other companies using legacy ASP. After its release, the reservation system was reborn to the point where we moved to an agile development system and made daily improvements while reflecting on business figures.

Each of the KPI values that were placed as post-release values have also improved steadily and actually hit their target results.

Mr. Takahashi said, “I was personally surprised that they looked at the numbers after development and made suggestions for improvement. Many system companies just develop the system and maintain it afterwards.”

We have already started improvement projects based on post-development numbers and other information.
Tokyu Resorts & Stay Inc. and the Tokyu Group are trying to achieve competitive advantage over other companies through DX. Not only in this project, but also in the future, the challenge will continue to be centered on speed and flexibility. Jitera will also make every effort.

Have a project in mind?

Engineers, designers, and business professionals work together to accelerate a winning business.

Build the Next Era of Software Development.

Build the Next Era of Software Development.